PLEASE DOWNLOAD THE NEWEST VERSION OF THE GAME AT

Cast down amongst the Forgotten, you must fight to survive and escape.

Be sure to chat with Tutorial Skeleton (Tutoleton? Skeletorial?) to get your bearings with the game. Controls are also customizeable.

I did alot of bug squashing, but in the event you get stuck or break the game, you can press HOME to restart completely. Also, don't forget you can "wall-jump" off of platforms if you're jumping up through them. Just hit jump again.

"It's hard as hell. Now, I'm not gonna take the full blame. It's the developer's fault." As the developer, I take full responsibility for the difficulty. :)

I'm glad you enjoyed the demo. Most of the bugs you encountered, including the lack of a CONTINUE screen after Game Over, were fixed in v.004, as well as some adjustments to the difficulty including larger hitboxes for some weapons, higher chances of chests, and lowered damage from some hazards. You can download this version at the link you put in the description. Very entertaining review, and I appreciate that you familiarized yourself with the game a bit before recording your impressions. I've taken some notes from your and other's feedback, and I'll be adding some thing to the game in the future such as crouching attacks based on the responses I've gotten. Thanks again for playing my game!

- The map (at least I'm assuming that's what it is) opens off-screen for me, possibly because of the 1440p resolution? Here's a screenshot: - You can open the map while dying

And some general suggestions:

- When jumping up ladders is the fastest way to climb them then that's the only way people are going to do it, so maybe put a cooldown on it or something

Ah, the journal (map thing) is actually completely broken, so its not just you. I thought I disabled the journal but I guess not!

Being able to quickly ascend platforms and ladders is somewhat intentional, but you're right, a cooldown before you can hop off the ladder again might make some sense. Thanks for downloading and commenting! 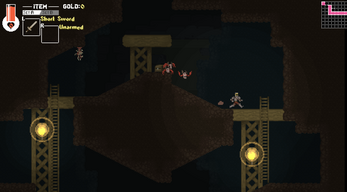